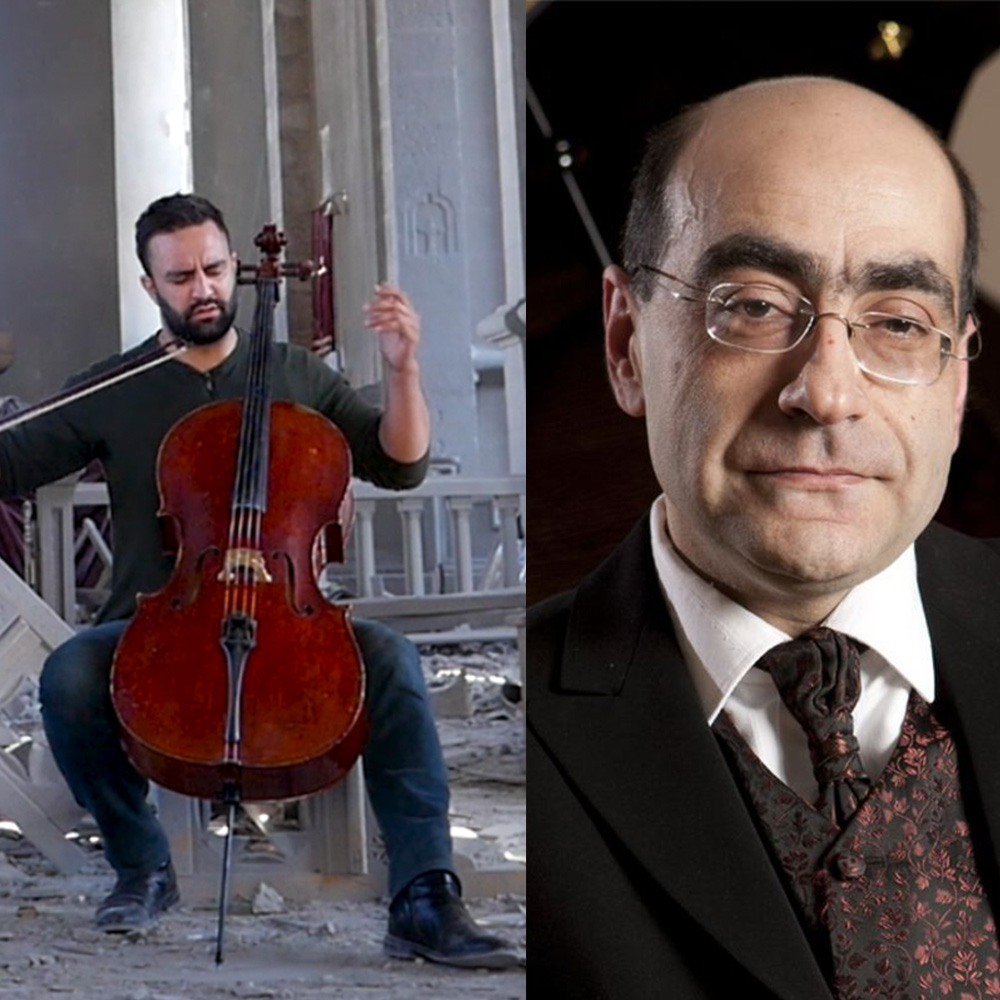 Sevak Avanesyan, Cello
Sevak Avanesyan is described as "a musician of extraordinary virtuosity and a remarkable range of sound capacities" (Bernard Greenhouse) and "undoubtedly, one of the most gifted musicians of his generation” (Janos Starker).Born in 1989 in Armenia, into a musical family, Sevak started studying cello at age of 5, with the well-known Armenian cellist Medea Abrahamyan, student of legendary Mstislav Rostropovitsch. He went on to study at the Tchaikovsky Specialized Secondary and Musical School in Yerevan until 2003. That year, his entire family moved to Brussels (Belgium) where he joined the class of Ms. Viviane Spanoghe at the Royal Conservatory. He graduated with the highest distinction in 2010 and was then accepted in the class of the renowned cellist Claudio Bohorquez at the “Hochschule für Musik Hanns Eisler" in Berlin.Besides his regular studies, Sevak Avanesyan has received precious advice from world famous artists such as Janos Starker, Bernard Greenhouse, Steven Isserlis, Mischa Maisky, Maria Kliegel, Lluis Claret, Peter Bruns, Garry Hoffman, Wolfgang Boettcher, Igor Oistrakh, Artemis Quartet, Gerhard Schulz and many others.Since his youngest age, Sevak has travelled the world as a member of the "Young Virtuosos" of AMAA (Armenian Missionary Association of America). He performed as soloist and chamber musician in venues such as the Berlin Philharmonic Hall, Concertgebouw in Amsterdam, Salle Gaveau in Paris, the Ford Hall of Toronto, the Sidney Opera House, the Palais des Beaux-Arts in Brussels. More recent concert seasons brought him to festivals such as the Festival de Radio France Montpellier, the Festival of Menton and the Brahms festival (Brussels) among others. Sevak has been laureate of many international competitions, including the International Cello Competition “Gerardmer” (France), the European Competition for Young Soloists in Luxembourg (first prize), the “Lions Club” European competition (first prize), and was awarded the “Golden Label” prize by the Belgian music press association, and first prize winner of “Belgische Stichting Roeping” promotion and many more.Sevak has worked together with highly respected conductors such as Hans Graf, Hugh Wolff, Andrey Boreyko and George Pehlivanian. As an ardent chamber musician, Sevak Avanesyan also performed with many well-known musicians such as Augustin Dumay, Philippe Graffin, Pascal Devoyon, Pavel Gililov, Maxime Vengerov, Alexei Moshkov, and musicians of the younger generation: Aleksandr Khramouchin, Lily Maisky, Julien Libeer, Alissa Margulis, his brother Hrachya Avanesyan and many others.Since March 2013, Sevak was the Solo cellist of the National Orchestra of Belgium for 4 years.At the end of 2016 the “Rhythm & Intervals” documentary by Comes Chahbazian premiered. This documentary is about the life of Sevak Avanesyan in Berlin during the period of 2011-2013. The documentary has already won prizes at several festivals and was aired on ARTR TV. Sevak plays on the very first Mateo Goffriller cello from 1689, kindly given to him by Mischa Maisky.


Armen Babakhanian, Piano
A prize-winner at several of the world's most prestigious international piano competitions including the Leeds, the Van Cliburn, the Guardian Dublin, the William Kappell, the Gina Bachauer, and the World Piano Competition, Armen Babakhanian has captured the imagination of the audiences and the critics alike through the intensity and honesty of his performances. Mr. Babakhanian has given recitals in the USA, Canada, Japan, the United Kingdom, Germany, Austria, Italy, France and Spain.

Babakhanian’s performance of the Shostakovich Piano Quintet with the Takács Quartet during Santander Festival in Spain was named the best chamber music performance of the festival.  Mr. Babakhanian has recorded for the ASV, Real Sound and Sigmund Classics labels. His performances have been broadcast on BBC, PBS (USA), ORF (Austria) and RAI (Italy) television networks. His recording of the Tchaikovsky piano sonatas has received rave reviews in the European press.

Mr.Babakhanian’s recent recording of Complete Piano Works by Aram   Khachaturian awarded the “Best Classical Album of the Year” at the Armenian Award 2007. In addition to his performing career, Mr. Babakhanian has served as jury member for several international piano competitions, including the Gina Bachauer, Prokofiev, Rachmaninoff, Khachaturian, Maria Callas,Armenia and most recently Brescia International Piano competitions. He has taught numerous master-classes in Russia, United Kingdom, Spain, Japan, China, Iceland and the United States. Mr. Babakhanian is currently Professor at the Komitas State Conservatory in Yerevan, where he also received his musical education under Professor Anahit Bogdanyan. In 2012 Armen Babakhanian became Dean of Piano Department at Yerevan State Conservatory.

In 2013 Mr.Babakhanian became Founder and Artistic Director of State Target Developing Program for young extraordinary musicians. He recently has been launched historical recording project “Anthology of Armenian piano music” which includes more than 60 CD’s and covers almost entire heritage of Armenian piano music within two centuries. During last concert seasons Mr. Babakhanian has been scheduled to perform recitals and concerto appearances as well as give master classes in Germany, Italy, Slovenia, Switzerland, France, Finland, Lithuania, Mexico, Guatemala, Ukraine, Russia, U.S.A, Thailand and Malaysia. In 2008 Armen Babakhanian was awarded Gold Medal by Ministry of Culture for great contribution in Spyurk-Armenia relations. In 2009 Mr. Babakhanian was awarded Artist Emeritus from the President of Republic of Armenia.