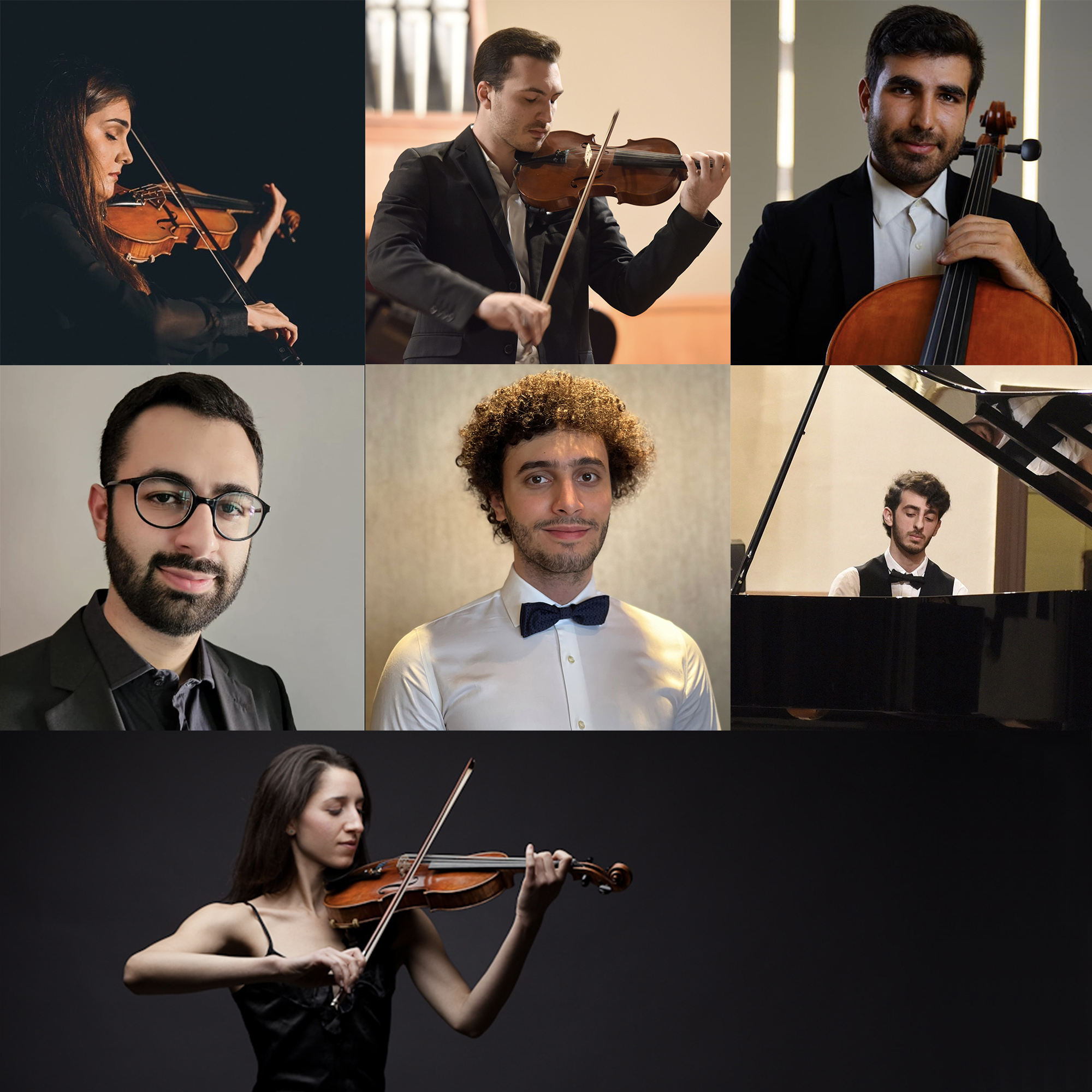 The Classical Music Club at the American University of Beirut was officially established in 2019 by AUB students that share a common enthusiasm for Classical Music. Its mission is to advance the culture of listening to Classical Music and make it more accessible to the general public, particularly the youth. It has so far organized thirteen Classical Music Concerts including two in Baskinta with the performers mainly being AUB Students and Alumni. Among those concerts were two Christmas Concerts, one Claude Debussy Piano Recital, and one Organ Recital. The club’s plans for the future include organizing more concerts, masterclasses, and lectures on various topics pertaining to listening to music.

RITA ASDIKIAN
Rita Asdikian, born in Lebanon, has a Bachelor's degree in violin performance from the Lebanese National Higher Conservatory of Music (2022), and she has performed with the Lebanese Philharmonic Orchestra (LPO) on several occasions.
She was a member of many music ensembles, including the National Youth Orchestra, and the NDU string ensemble. She has performed in several local and regional festivals (Beiteddine, Arz, Ghalboun, Palermo, and others). She has been a regular performer with the AUB Classical Music Club.
Rita is also a diligent Neuroscientist with a Master's degree from AUB (2019), with a research focus on epilepsy, and she has a unique vision on the impact of music on cognition and brain development.

ANTONIUS CHEDID
Antonius studied violin at the USEK School of Music. He has a passion for classical, oriental, and blues genres and performs all three. Antonius is a regular performer with the AUB Classical Music Club.
Antonius graduated from the American University of Beirut in 2021 with a Bachelor’s degree in Mechanical Engineering and a minor in Political Science. He currently works as a sustainability consultant at Dar al Handasah. He also runs a Lebanon-based violin-manufacturing business with his uncle called Crafted Violins which specializes in high-quality handmade instruments for advanced students and professionals. The violin Antonius is playing tonight was built by him and his uncle.

MAYA MAALOUF
Maya began playing the violin at age four. She is a graduate of the Eastman School of Music (BA) and the Catholic University of America (MM), both in violin performance. Maya’s primary teachers have included Charles Castleman, Amy Beth Horman, Ivan Minas-Bekov, and Joseph Gatwood.
She also performed with the Fairfax Symphony Orchestra, the Alexandria Symphony Orchestra, and the Landon Symphonette, and was a member of the Pan-American Symphony Orchestra. She has been a participant in several solo, chamber, and orchestral summer programs and festivals including the Quartet Program, the National Orchestral Institute, the National Symphony Orchestra Summer Institute, Killington Music Festival, and Eastman School of Music Balinese Gamelan Summer Workshop.
Maya is a member of the Lebanese Philharmonic Orchestra, an instructor in the Department of Fine Arts and Art History at the American University of Beirut, and has a private violin studio where she blends the Suzuki method with traditional pedagogical approaches. She is currently a Master's student in Education Policy and Administration at AUB.

MUSTAPHA SAHILI
Born in Beirut in 2001, Mustapha is a cellist studying at the National Higher Conservatory of Music for 8 years now under the direction of Roman Storojenko. He has performed with the Lebanese Philharmonic Orchestra (LPO) and in other chamber music events. He also participated in several oriental concerts focused on Lebanese and Arabic music repertoire. Mustapha was part of many workshops and mentorship programs on cello performance.
Mustapha is also studying General Medicine in the Faculty of Medical Sciences at the Lebanese University in Beirut.

WIAAM HADDAD
Born in 1997 in Baskinta, Lebanon, Wiaam holds a Baccalaureate in Piano Performance from the Lebanese National Higher Conservatory of Music (2020) having studied under Gayane Gasparyan, and is currently working towards his Licence there. He co-founded the AUB Classical Music Club in 2019 and is now the club’s Musical Director. He is a regular performer in the club’s concerts and has also performed with the National Youth Orchestra and at Les Musicales de Baabdath music festival.
Having studied Tonal Harmony with Jad Riachi and Counterpoint and Musical Analysis with Fr. Fadi Taouk, Wiaam is a composer heavily informed by the continental musical tradition of the 18th and 19th centuries in form and style. His compositions for solo and chamber music have been featured in AUB Classical Music Club concerts and in the latest edition of Les Musicales de Baabdath.
He also studied Byzantine Chant under Jean El Khal and holds a Diploma in Byzantine Music Interpretation (2018) from the Hellenic Conservatory of Music and Arts. He is a member of The Mount Lebanon Orthodox Choir under the direction of Joseph Yazbeck, and the Curriculum Coordinator at The School of Ecclesiastic Music (SEM).
Wiaam holds a Bachelor’s degree in Architecture (2021) and a double minor in Arabic and Urban Studies from the American University of Beirut where he is continuing his Master’s degree in Urban Design.

KHALIL CHAHINE
Khalil Chahine’s musical life began as a boy soprano. He joined the International College Choir, receiving an AMIS veteran status in 2017 for continued participation and excellence in AMIS High School Honor Choir. As a tenor, he has performed choral works with the AUB Choir and Choral Society and Le Choeur de l’USJ, under the direction of Thomas Kim and Yasmina Sabbah respectively. He was a two-time recipient of the Rosemarie Haggar Choral Award (2018, 2020). Khalil studied the works of great composers and music theory with Vartan Agopian which inspired him to take up composition. Performed works from his output include Ave Maria (2018), Der Musensohn (2019), and Christ’s Nativity (2019).
In 2014 he was introduced to the organ. In 2017, he organized a concert with the United Strings of Europe ensemble and conductor Franck Fontcouberte, accompanying them on the organ. Khalil has received masterclasses with Lebanese organist Naji Hakim, and spends his summers taking organ lessons with Maître Frédéric Blanc, organiste-titulaire of Notre-Dame d'Auteil, Paris, France. He gave a solo organ concert in May 2022 in Assembly Hall titled “Variations on Alma Mater” which featured his variations on AUB’s anthem.
Khalil graduated with a BS in Biology and a double minor in Music and Philosophy in 2021 from the American University of Beirut, and is currently a second-year medical student there. He is a cabinet member of the AUB Classical Music Club and a regular performer in the Club's concerts.

JAWAD HAMADANI
Jawad Hamadani is a piano student at the Lebanese Higher National Conservatory of Music (LNHCM). He has been playing the piano for 7 years. At the age of 12, he started on his own with some guidance from his uncle, who taught him basic piano techniques and solfège.
Jawad has been a regular guest of the AUB Classical Music Club since 2019. He has dedicated a solo piano concert to the French composer Claude Debussy (March 2020, Assembly Hall) and has participated in several recitals performing works by, Bartok, Schumann, Scriabin, Chopin, Liszt, Arensky, Moszkowski, George Baz, Abdel Rahman El Bacha, and Wiaam Haddad.
Jawad graduated from Hasan Kamil Al-Sabbah Public High School in 2020 and is currently working as a data engineer and web developer. He is now studying under Armen Ketchek for his Baccalaureate in Piano Performance in the LNHCM. He is working to enroll in a higher conservatory of music in France next year and aims to become a concert pianist.