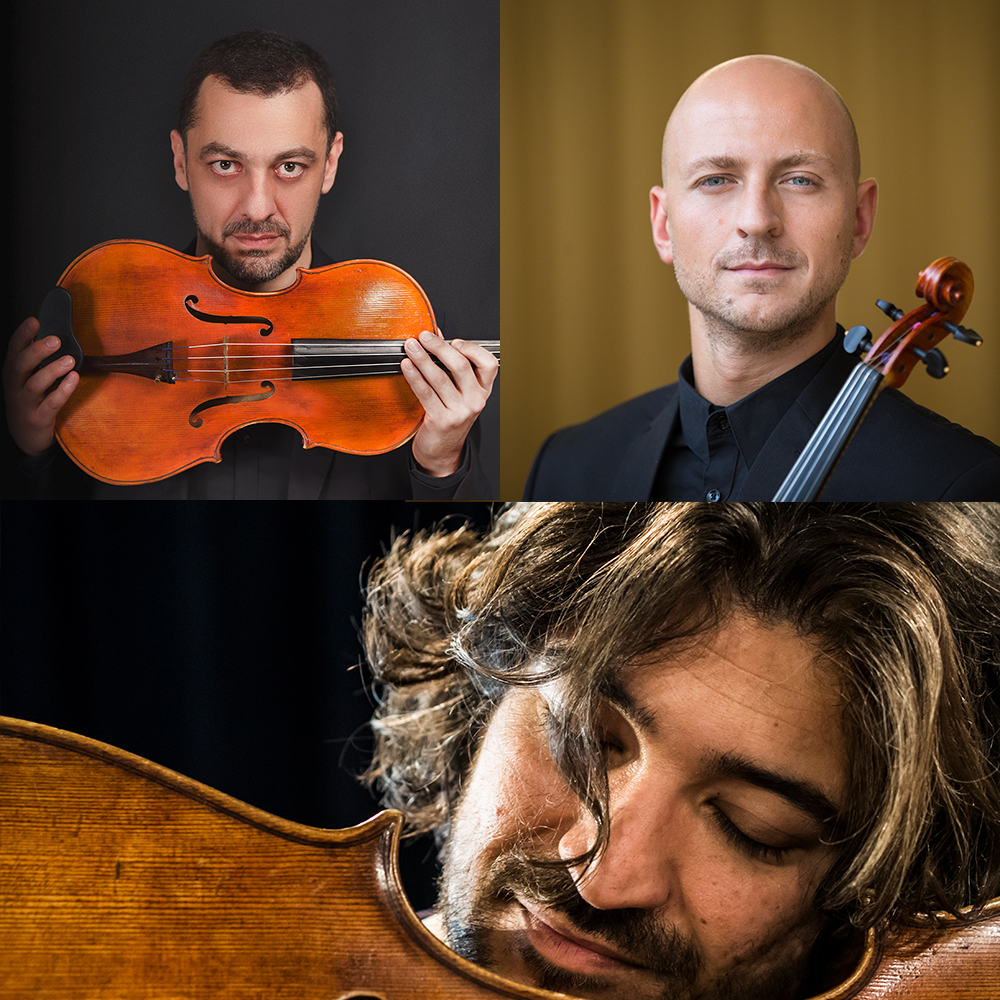 Enrico Filippo Maligno, Violin
Born in Rome in 1986, He graduated with honors in 2008 at Conservatorio di Vicenza. He continued his studies with C. Horak, K. Sahatci and with N. Chastain.
After winning the position for first violin section in Berner Symphonieorchester in 2016, he became a member of the Tonhalle Orchester Zürich in 2017. He additionally works in Italy as Konzertmeister of the Colibrì Ensemble and as guest leader in other different Orchestras.
He has collaborated in orchestra and in chamber music ensembles with internationally renowned musicians and conductors including Paavo Jarvi, Bernard Haitink, Semion Bychkov, Herbert Bloomstedt, Giovanni Antonini,  Franz Welser-Möst, Enrico Dindo, Klaidi Sahatci, Christophe Horak, Alexander Lonquich, Bruno Giuranna, Monika Leskovar, Sergio Azzolini, Giovanni Sollima, Calogero Palermo, Bruno Delepelaire performing for important festivals and associations in Italy and abroad.
His orchestral work has always been accompanied by chamber music, taking part in courses with Heime Müller, Hatto Bayerle, C. Giovaninetti, C.C. Schuster, J. Meissl, V. Erben, E. Feltz, L.Coppola and V. Ghielmi. He currently follows the Graduate Course in Basel in the class of Rainer Schmidt (Hagen Quartett) with the zArt Quartett.
From July 2021 He became Artistic Director of his own chamber music “Festival Sette Parole”.
Enrico Filippo plays one of the most beautiful instrument made by Ansaldo Poggi in 1929.

Riccardo Savinelli, Viola
Riccardo Savinelli is a passionate and fine chamber musician.
He regularly collaborates as Principal Viola with Enrico Dindo and his Solisti di Pavia, Orchestra Filarmonica di Torino, Orchestra da Camera di Perugia, Solisti Aquilani, Orchestra da Camera di Pescara Colibrì Ensemble. He plays in orchestras such as the Orchestra Mozart of Claudio Abbado, Spira Mirabilis, Orchestra dell’Accademia Nazionale di Santa Cecilia di Roma, Orchestra Leonore di Pistoia, Orchestra delle Settimane Musicali di Stresa, conducted among others by Gatti, Maga, Barshai, Penderecki, Noseda, Maazel, Pappano, Haitink. He won the competition for the First Viola of the Orchestra Sinfonica di Roma, a position he held for 10 years.
He has played in the most prestigious halls in the world such as the Philarmonie (Berlin), Cadogan Hall (London), National Theater (Beijing), Auditorium Nacional (Madrid), Basf-Festival (Ludwigshafen), Mozarteum (Salzburg), Musikverein (Vienna), Carnegie Hall (New York), Kennedy Center (Washington), KKL of Lucerne.
His particular predilection for chamber music led him to collaborate with musicians such as Enrico Dindo, Francesca Dego, Mario Brunello, Pavel Vernikov, Andrea Oliva, Enrico Pace, Giovanni Sollima playing for Guggenheim Foundation, Academia dei Cameristi of Bari, Settimane Musicali di Stresa, Spoleto Festival, Festival di Portogruaro, Amici della Musica di Modena, Fondazione Teatri Reggio Emilia, Unione Musicale di Torino, GOG di Genova, Concerti del Quirinale, Mecklenburg-Festival, Ravello Festival, Accademia Filarmonica Romana.
He has intense activity with the String Quartet Quartetto Mirus of which he is a permanent member, an ensemble that performs for the most important Italian and European festivals. In its ten-year career the Mirus Quartet has collaborated with guest musicians such as Mario Brunello (Antiruggine), Cristina Zavalloni (Unione Musicale di Torino), Belcea Quartet (GOG di Genova).
He is also interested in contemporary music and explores new musical languages ​​playing many projects for the Accademia Filarmonica; with the Black Mountain String Quartet he played for the Swiss Institute of Rome the monumental Second Quartet by Morton Feldman, a piece performed only about ten times from the date of composition due to the complexity of the piece and the duration (6 continuous hours).
With the Quartetto Mirus, he performed live on Radio Rai3 the last chamber work by the great contemporary composer Thomas Ades, "The four Quarters" for the Concerti del Quirinale, that has been the first performance in Italy after its Premiere.
Has recorded for Labels such as Decca, Sony, Brilliant, Tactus. For Naxos, he has recorded as a soloist the Triple Concerto by Ghedini and recently with the Quartetto Mirus a CD of unpublished compositions by Felice Giardini.
He graduates in Viola at the Conservatory of Novara, later he obtains the Master Degree at the university Hogeschool of Ghent (Belgium) under the guidance of Michael Kugel. He specializes with Danusha Waskiewicz (Mozart Orchestra and formerly Principal Viola of the Berliner Philharmoniker), Simonide Braconi (Principal Viola of the Teatro alla Scala), Simone Briatore (Principal Viola of the Accademia Nazionale di Santa Cecilia), Gilad Karni (Principal Viola of the Tonhalle of Zurich).
He also graduates in Philosophy with a thesis on Philosophy of Music with Livio Bottani.
He collaborates for 10 years with the magazine "Allegro con Brio" directed by Luigi Fait for which he writes articles on philosophy and music.
He is the creator, together with the actor and director Alessandro Rubinetti, of the musical theatrical visits organized at the Museum of Musical Instruments in Rome.
He is co-founder and artistic director of Avos Project - International School of Music in Rome.
A great book lover, he attends creative writing courses at the Holden School and publishes a book of novels and short stories for Giulio Perrone Editore.

Jacopo di Tonno, Cello
Born in Naples in 1977, Jacopo Di Tonno begins to study the cello at the age of nine and graduates with full marks (10/10 cum laude) from the “L. D’Annunzio” Conservatory in Pescara. He refines his skills with Radu Aldulescu in Spain and E. Dindo and improves his skills in the field of chamber music with P. Farulli of the Alban Berg Quartet. He becomes the first cello of the “Orchestra Giovanile Italiana”. He completes the two-year course with full marks (60/60 with honours). He boasts collaborations with conductors, such as R. Muti, G. Sinopoli, N. Marriner, C. Hogwood, G. Noseda, L. Berio, L. Pfaff, C. M. Giulini, M. Honeck, N. Luisotti and more.
When he is only twenty-one years old, he is appointed as the first cello at the “Teatro Regio” in Turin and from that moment on he starts working with the most renowned orchestras in Italy and abroad. He is the first cello of I Solisti di Pavia, with which he performs during the most prestigious international concert seasons.
He collaborates with E. Dindo in chamber music concerts and record projects.
He is a member of the arts commission and the first cello of new Italian music excellence, the “Colibrì Ensemble” (http://www.colibriensemble.it).
He performs in many concerts, including solo concerts, and features in recordings for Decca Italia, Harmonia Mundi, Brilliant Classics, Trito’, Velut Luna, Radio3, Sky Italia, Sky Arte and Rai Radiotelevisione Italiana.
He collaborates as tutor with the most young Orchetra like: “Orchestra Giovanile Italiana” in Fiesole and the "Orchestra del Teatro Olimpico" in Vicenza.
Jacopo Di Tonno is founder and artistic director of the "Gravedona Chamber Music Festival" (www.gcmf.it) a festival that he see him as protagonist together to: Francesca Dego, Alexander Lonquich, Lorenza Borrani, Roman Simovic, Alessandro Carbonare and many others.
He is a cello teacher at the “G. Nicolini” Music Conservatory in Piacenza and in the “Pavia Cello Academy” the first Italian academy dedicated to the cello. 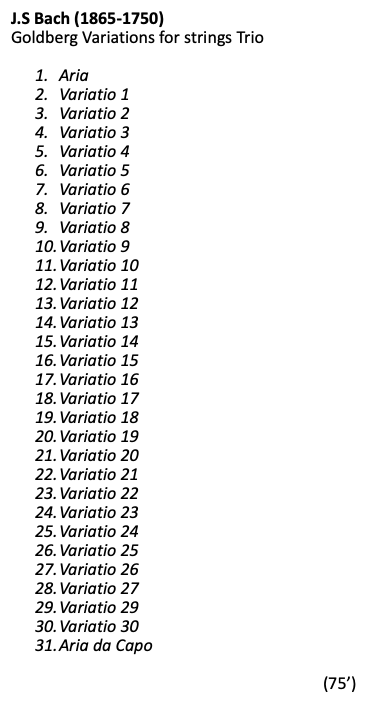