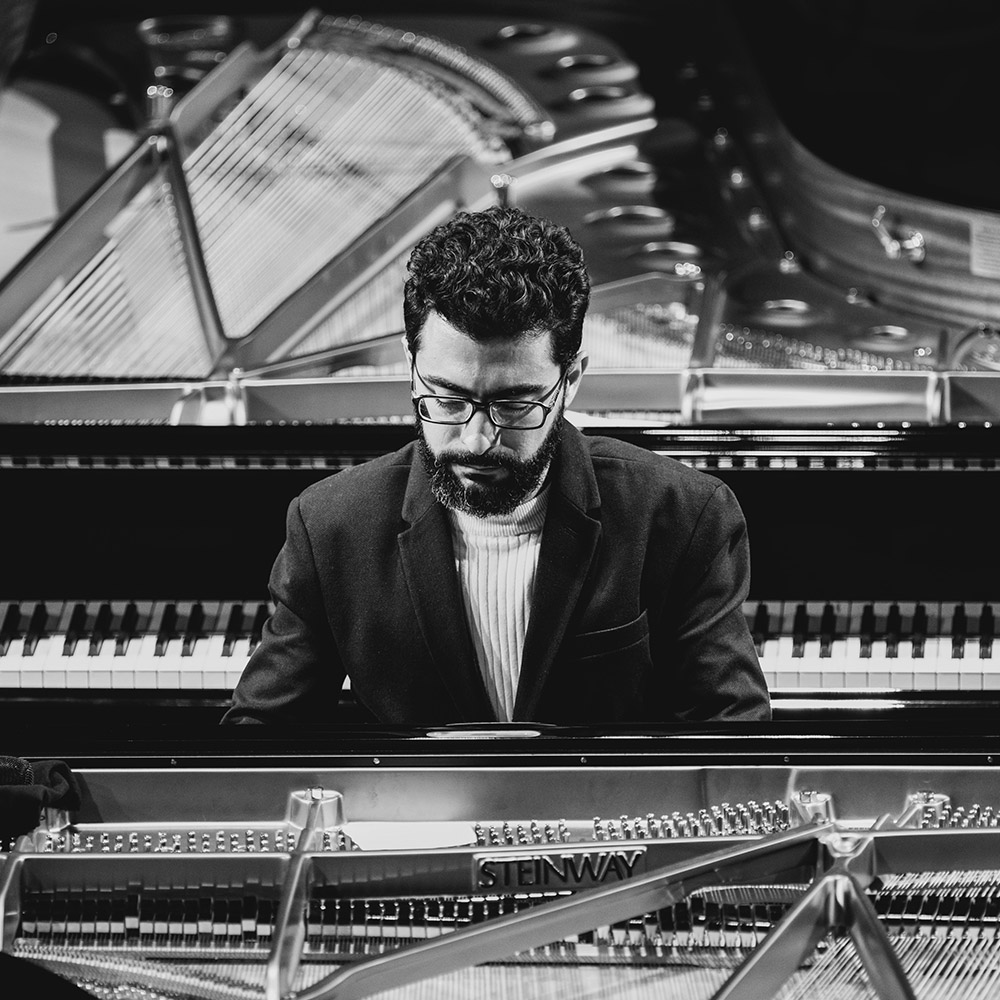 Tarek Yamani
Born and raised in Beirut, Tarek is a pianist and composer who taught himself jazz at the age of 19. He has been dedicated to exploring relationships between Black American Music and classical Arabic music which are most evident in his second album "Lisan Al Tarab: Jazz Conceptions in Classical Arabic", and in his 3rd release “Peninsular” which fuses jazz with quarter-tones and the rhythms of the Arabian Peninsula.A recipient of many prestigious awards such as the Thelonious Monk Jazz Composers Competition, the Baryshnikov Artist-in-Residence, the Huygens Scholarship, the Prins Bernhard Culture fund and the Abu Dhabi Festival Commission, Tarek has been part of three editions of the International Jazz Day all-star concerts and performed in venues such as the Smithsonian (DC), Barcelona Cathedral at La Merce, Atrium at Lincoln Center (NYC), Boulez Saal (Berlin), MuCEM (Marseille), the UN Assembly Hall (NYC), Aaron Davis Hall, Melbourne Arts Center, Sejong Center for the Arts (Seoul), and Gran Teatro de la Habana (Cuba).Tarek is also an educator, author of two self-published music books on rhythm and a film score composer of films screened in 100+ festivals around the world and broadcasted on AMC network, BBC and Sundance TV.

Quotes
- “Trailblazing pianist transforms Khaleeji music.” — CNN
- “A revelation… an organic hybrid of ecstatic proportions” — NYC Jazz Record
- “Yamani plays jazz piano with more than a hint of Arab influence.” — The New York Times
- “Yamani’s resonant chords echo hauntingly in a provocative improvisation with a touch of thrilling angularity.” — All About Jazz
- “A world-jazz heard nowhere else.” — TSF Jazz
- “Tarek Yamani, a piano in each hand.” — L'Agenda Culturel
- “Yamani’s piano amuses in varying the sensations, contradictory, paradoxical, resolved in the perception of the musical moment.” — L'Hebdo Magazine
- “Inspired by the common black roots of Khaleeji music and jazz, weaves refined cadences.” — La Libération
- “Arabic modes run in his fingers as much as jazz, his playground... a remarkable rhythmic tonicity.” — Le Monde
- “Luminous music anchored in jazz harmony and in Arab traditions. No kitsch postcards here, but a joyous and thoughtful vision. ” — Télérama
- “There is ecstasy, there is trance, and one would hope that this goes on for hours, until a full transcendence of the mind is reached, until all self-control has vanished.” — Your Middle East
- “Lebanese-born pianist Tarek Yamani proved to be a magician with his chromatics and disquieting passing tones.” — New York Music Daily
- “Shimmering spidery piano godliness.” “Very literally a cross of his two worlds.”  —  Time Out
- “The pianist exploits the most expressive musical idiom of his adopted city (jazz) to explore, transform, transfigure and shed fresh light on the music of his rooted, real homeland.” – Time Out