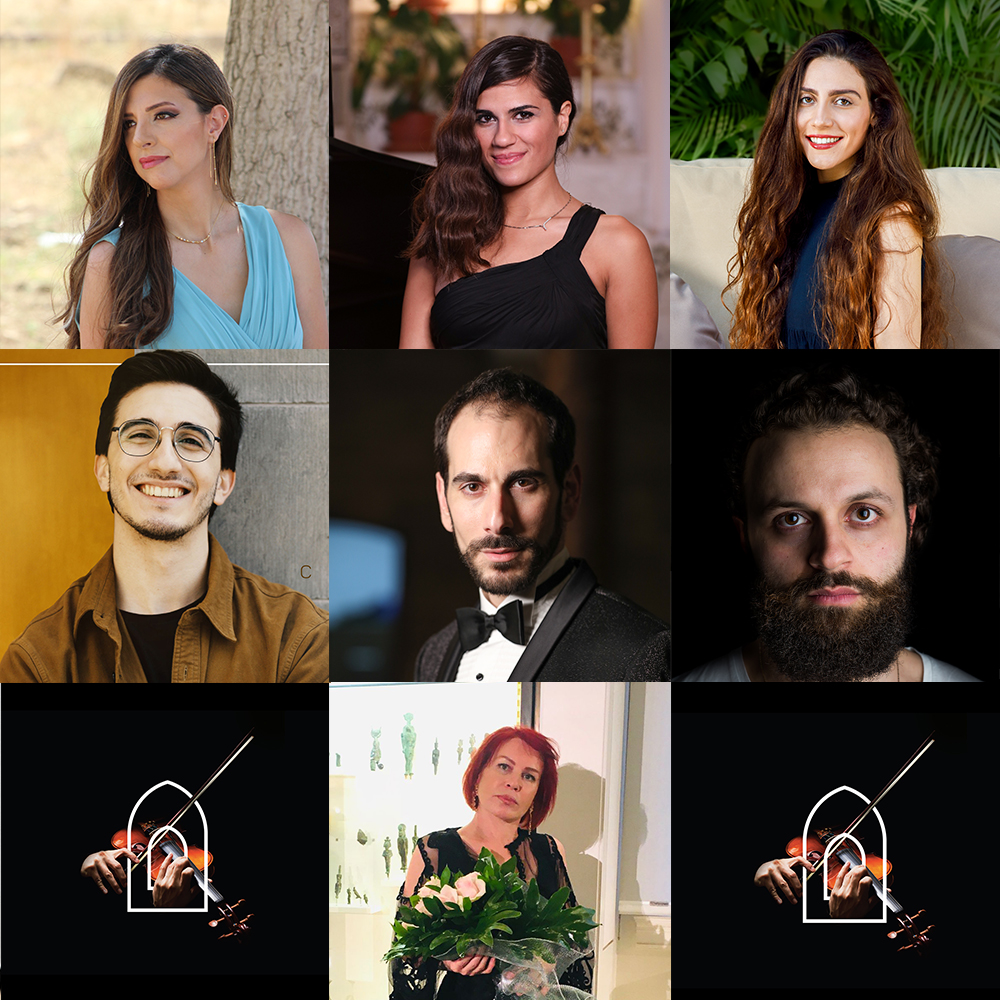 MIRA AKIKI, SOPRANO
Mira Akiki, a Lebanese coloratura Soprano, known for mastering Vocal and Acting techniques with high agility. She discovered her passion for music when she was 5, every time she heard her father playing the piano.
After joining the NDU choir at the age of 11, her piano teacher discovered her vocal power.
She joined the Lebanese Higher Conservatory of Music six years later, and graduated in Opera Singing in 2015 with honors, class of Fr. “Toufic Maatouk”.
She had the privilege to work with renowned international singers and vocal coaches namely Elizabeth Norberg Schulz, Cinzai Forte, Luciana D'Intino, Caterina Di Tonno, Simone Alaimo, Joyce El Khoury, Shady Torbey, Xenia Preisenberger and many others, and has collaborated with international directors as Marco Spada, Alessio Pizzech, Roberto Catalano, Mirana Naim, and Joseph Sassine.
Mira played many roles in different operas. She was Frasquitta in Carmen (2012), Marcellina in Mozart’s “Nozze di Figaro” (2013), Berta in Rossini’s “Barbiere di Siviglia” (2014 & 2017), Despina in Mozart’s “Cosi fan tutte” (2015), Adina in Donizetti's “L’Elisir d’amore” (2016), Barbarina in “Nozze di Figaro” (2018).
Mira was spotted performing in different local and international festivals and events including Beirut Chants festival, Al Bustan festival, the Lebanese National Museum, Expo Milan, The Opera house of Muscat, Al Hussein Cultural Center in Jordan.
Mira enjoys ensemble works. She is currently member and soloist in the Antonine Choir since 2016.

Olga El Kik, soprano
The Lebanese soprano, Olga El Kik Kadi, commenced her singing career in Lebanon, where she studied at the Lebanese National Higher Conservatory of music with Gayane Nersessian and earned her Baccalaureate degree with distinction in 2019. She enjoyed performing with Antonine University Choir, Notre Dame University Choir, and Les Cordes Resonnantes Ensemble in Lebanon, Brazil, New York, France, Canada, and Italy. As her early performance, she relished portraying Despina from Mozart’s Cosi Fan Tutte at Al Bustan Hotel and since then her repertoire continued to grow from Vivaldi, Pergolesi, Händel, Bach to Verdi, Puccini, and Mascagni. She worked with renowned international singers and vocal coaches as Nadejna Manoyan, Elizabeth Norberg Schulz, Toufic Maatouk, Shadi Torbey, Artemisa Repa, Cinzia Forte, Micaella Mingheras and has collaborated with international pianists and directors as Denis Dubois, Franck Foncouberte, Alberto Maniaci, Salvatore Scinaldi, Fabio Centanni, and Toufic Maatouk. In 2018, she participated in the Voice Arab, the reality television singing competition program, to spread lyrical singing across mainly the Arab world and she succeeded by being a finalist due to surprisingly high number of votes from Arabic countries. Aside from her singing career, Olga is a civil and environmental engineer graduated with honor from the American University of Beirut.

Natasha Nassar, Mezzo-soprano
Natasha Nassar is a rising Lebanese-American mezzo soprano whose career has taken her across the globe. Known for her rich and velvety tone, she has continued to captivate audiences with her distinct voice. Born in London and raised in Dubai, she later moved to the United States of America. Ms. Nassar is a graduate of Northwestern University, where she completed her degree in Opera performance. She has trained with world-renowned vocal teachers and coaches including Gayletha Nichols, Penelope Bitzas, Jane Klaviter, and Roger Malouf. She has won many awards in music and opera, including being one of the winners of the National Association of Teachers of Singing (NATS) Competition. Ms. Nassar’s accomplishments include numerous operas and musical productions, master classes, competitions, awards, opera programs, and concerts. Some of the highlights of her career include her Carnegie Hall debut where she was invited as a solo guest artist, as well as her performance at the Dubai World Cup, where she was invited to sing at the opening ceremony.
In addition to her career in Opera, Ms. Nassar is also an accomplished composer. She constantly strives to merge her passion with music with her dedication to humanitarian causes. Her most recent projects include a benefit concert for the victims of the 2020 Beirut explosion, as well as other concerts she gave that raised money to help rebuild Sursock Palace in Lebanon. She is currently working on a debut album which will be released in 2022.
Ms. Nassar is currently based between Beirut and New York City.

Charles Eid, Tenor
Charles Eid, aged 24 years old, is a Lebanese Mozartian/Rossinian Tenor. He's the student of the esteemed Maestro Toufic Maatouk. For the last 7 years, he studied opera at the Antonine University Music Conservatory, attended several masterclasses from various professional opera singers, gaining a large set of skills. In spite of his young age, Charles has a wide and professional music repertoire as a soloist and performed in many operas (Mozart’s Le Nozze Di Figaro, Donizetti’s L’Elisir D’Amore...), sacred works (Gounod’s St. Cecilia Mass, Handel’s Messiah...) and other events in several countries around the world. He was a vocal coach at the Conservatory in Bikfaya - Lebanon for 3 years. Adding to his musical career, Charles is an accomplished Software Engineer.

Cesar Naassy, Bass-Baritone
Known for his striking stage presence and deep warm voice, Cesar finds himself particularly well in the works of Mozart. His notable vocal agility and cantabile voice, also allowed him to tackle the Belcanto repertoire of Rossini, Bellini and Donizetti. Some of the roles he performed on stage include Raimondo in “Lucia di Lammermoor”, Dulcamara in “Elisir d'amore", Don Alfonso in “Così fan tutte”, Bartolo in “Le nozze di Figaro, Sarastro in “Die Zauberflöte”, The king of Scotland in “Ariodante” and Superintendent Bud in “Albert Herring” to name a few…

Since the start of his singing career, he has performed on the international stage in renowned theatres, such as "Teatro San Carlo" in Naples, "Teatro Pergolesi" in Jesi, “Teatro Flavio Vespasiano” in Rieti, “Auditorium della Concigliazione” in Rome, all the way to “Théatre de l'Opéra de Montreal” in Montreal and “Théatre Monument National”.

He has had the privilege to work with world renowned directors such as Charles Binamé, and has studied with international artists such as Caterina Ditonno. He also holds two Masters degrees in Music, one of which is from the prestigious McGill University in Montreal.

Cesar has been under the tutelage of maestro Toufic Maatouk since the beginning of his singing career in 2015.

OLGA BOLUN, PIANO
Olga Bolun was born in a family of great musicians and remarkable educators (horn player and harp teacher).  Since her debut in music at age of 5 studying harp and piano, she impressed with her remarkable talent for music and eye-catching ability to learn.
‍
Mrs. Bolun graduated in her higher music degree in Piano specialization from the State Academy of Music from Chisinau, Moldova. According to Educational Perspectives Chicago, it’s the US equivalency of Master’s Degree in Music.
‍
Before moving to Beirut, Mrs. Bolun was teaching at the National Academy of Music from Bucharest, Romania, titled as university lector - collaborative pianist.
‍
In Lebanon, she proved her outstanding music skills successfully performing an impressively large chamber music program and by numerous collaborations with leading Lebanese, European and US artists, under the umbrella of the Lebanese National Higher Conservatory of Music and the Lebanese Philharmonic Orchestra.
‍
Mrs. Bolun is a permanent invitee of local and International Festivals in the Middle East.
Apart from performing and touring nationally and internationally, Mrs. Olga Bolun teaches piano at the Lebanese National Higher Conservatory of Music.


Since the start of his singing career, he has performed on the international stage in renowned theatres, such as "Teatro San Carlo" in Naples, "Teatro Pergolesi" in Jesi, “Teatro Flavio Vespasiano” in Rieti, “Auditorium della Concigliazione” in Rome, all the way to “Théatre de l'Opéra de Montreal” in Montreal and “Théatre Monument National”.

He has had the privilege to work with world renowned directors such as Charles Binamé, and has studied with international artists such as Caterina Ditonno. He also holds two Masters degrees in Music, one of which is from the prestigious McGill University in Montreal.

Cesar has been under the tutelage of maestro Toufic Maatouk since the beginning of his singing career in 2015.