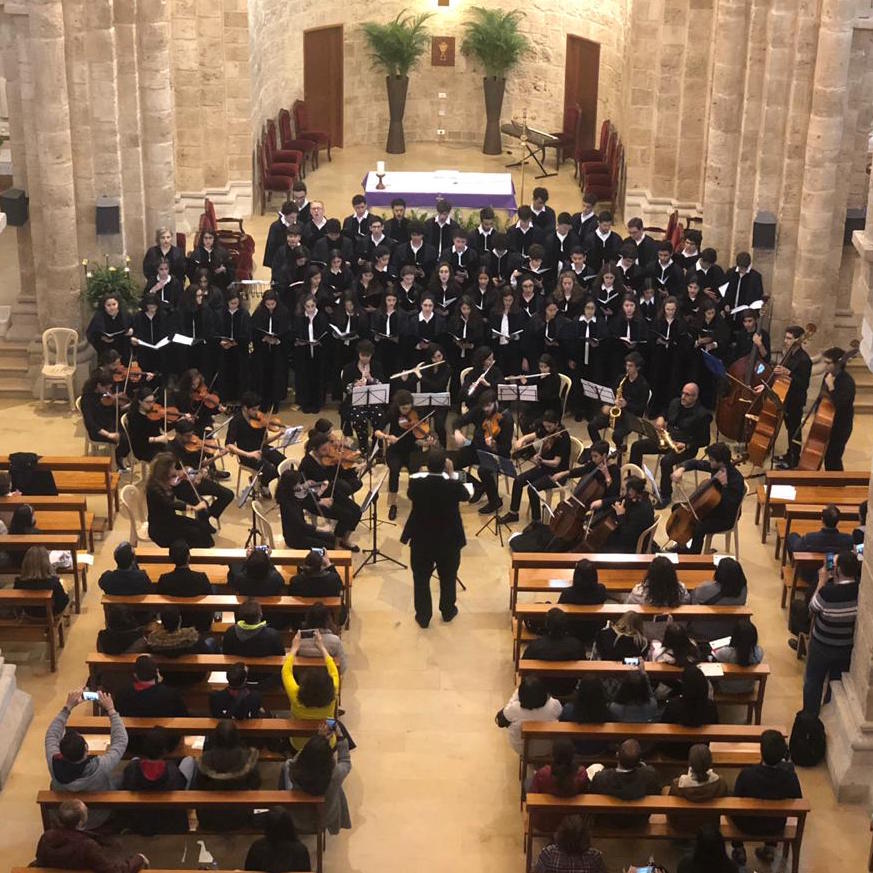 The Jamhour Choir was initially founded in 2010, to perform Taizé prayers and chants every Friday during Lent. It was formed of a small group of secondary school students; that is, 25 singers and 5 musicians.

At first, the founders were not expecting their Choir to take off the way it did!

The initiators of the project were Father Denis Meyer S.J, who is currently the spiritual leader of the School and Mr. Haytham Azzi, composer and music instructor who graduated from Kaslik University with a Master’s degree in Musicology.

Following the success of the weekly Taizé prayer sessions, the Jamhour Choir decided to perform during the annual college fair. And so the journey began!
‍
In 2011, a year after the first concert was held, the College Notre Dame de Jamhour founded its Music School with the accreditation of the Lebanese Government. The school rector Father Bruno Sion Sj, the spiritual leader Father Denis Meyer sj, and the supervisor of sports and artistic activities Miss Alice Keyrouz fully supported M. Haytham Azzi, who initiated the project and is today, the Music School’s director.

One objective of this project was to provide students with music lessons, in order to eventually enlarge the Choir and the Orchestra.

By 2011, the number of Choir members increased to 70 singers and 10 musicians.

In 2015, the number of participants grew to 90 singers and around 30 musicians, as some of the music school students and teachers decided to join the orchestra. The orchestra consisted of a complete string section (Classical guitar, violin I & II, viola, cello and double bass), woodwinds (flute, oboe, clarinet, and alto sax), brass (trumpet) and percussions (piano and classical percussions). As for the oriental repertoire, the ensemble was joined by a nay, oud and oriental percussions.
All solo singers were classical singing students in the music school. The leading singer was their teacher Ms. Corinne Haddad Azzi, who contributed a lot in refining the raw sound of the choir.

Since its launch, the choir has participated in many International events.

‍The Divine Liturgy presided by the General President of the Jesuits worldwide, Father Adolfo Nicolas, during his visit to Lebanon in March 2011.


As for the Repertoire, the Choir has interpreted songs of senior composers:

Practicing music allows students to refine their souls and to familiarize them with the meaning of commitment. The practice of music improves their humanitarian, musical, technical, interpretation and execution skills, which abide by the Jesuit’s multifaceted objectives.