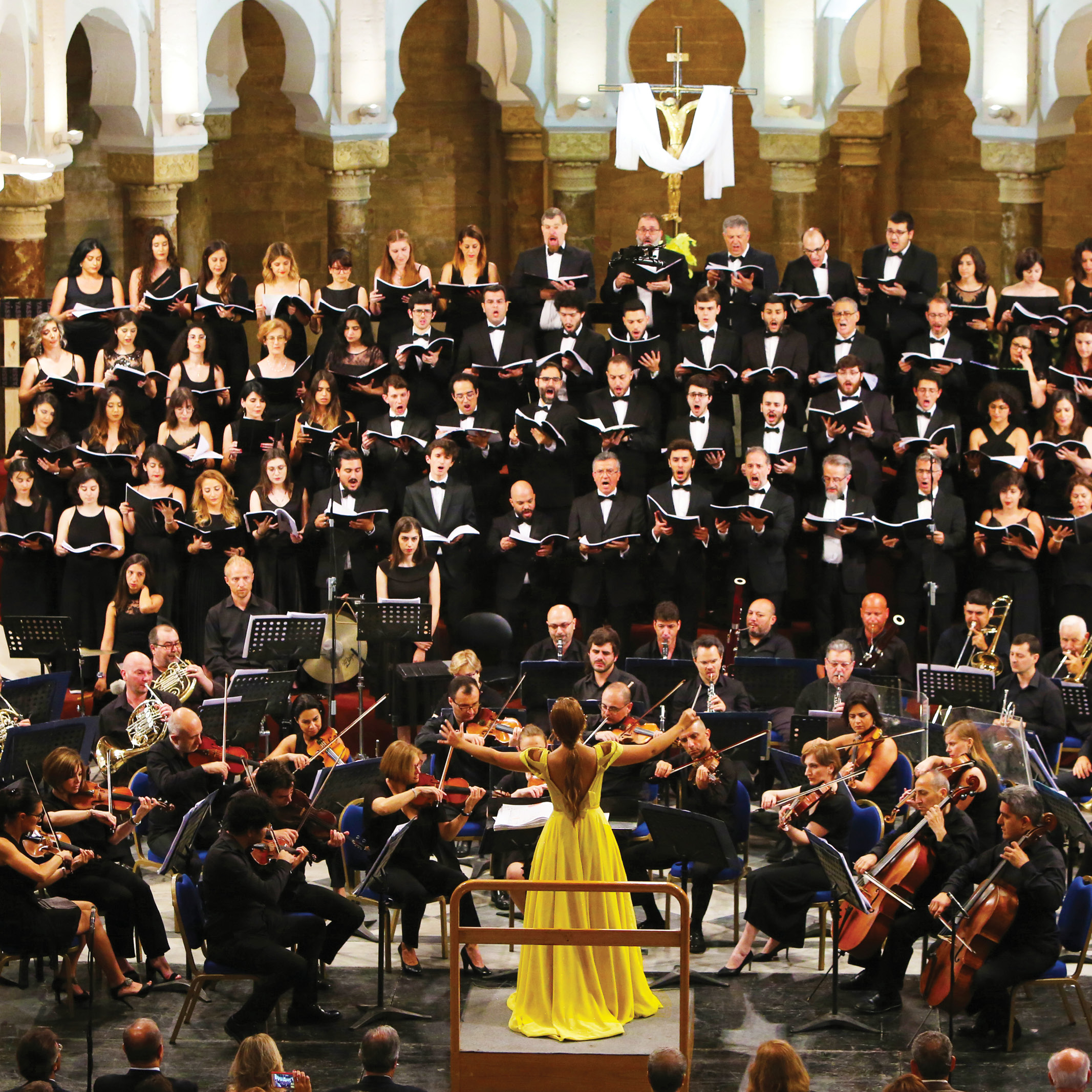 Founded in 2015 by Pr. Salim Daccache s.j., the USJ Choir assembles today more than seventy singers of different ages, professions and backgrounds. It also encompasses the Ensemble Vocal Baroque de l’USJ, an advanced chamber choir specialized in early music.
Under the baton of Yasmina Sabbah—one of the rare Lebanese female conductors of western orchestral and choral music—the Choir has been proof that anyone can perform music to the highest possible standards.
In collaboration with members of the Lebanese Philharmonic Orchestra, as well as the Jeunesses Musicales du Liban Orchestra, the Choir has covered a large and varied repertoire ranging from Baroque to Contemporary music, the most notable being Mozart’s “Vesperae Solennes de Confessore “, Joseph Haydn’s “Nelson Mass”, J.S. Bach’s “St. John Passion”, Karl Jenkins’ “The Armed Man”, to name a few.
Increasingly recognized for its nuanced musical interpretations, the Choir lays significant emphasis on musicality, meticulously shaded dynamics and articulation. As a result, in only four years, the choir has gained its place next to the leading choirs in the country. It is in the Choir’s mission to introduce well-known masterpieces, as well as obscure works to the public.
The USJ Choir aims to contribute in raising Lebanese choral music to international standards and to keep spreading the joy of singing.

‍Yasmina Sabbah
Yasmina Sabbah holds a Masters of Music in Choral Conducting from the prestigious University of Cambridge, in the UK.
She is one of the few active women conductors in Lebanon, and currently leads the USJ choir, the Conservatory Youth Choir and Children Choir, as well as the Jeunesses Musicales du Liban orchestra. She is also a professor of music at AUB and LAU.
Yasmina Sabbah has received several awards such as the Patron’s Award in ChoirFest Dubai (2015), the Philippe Jabre Merit Award (2012), the Rosemary Salhaney Haggar Choral Award (2010), and the Choral Leadership Award (2009).
Her aim is to earn a Ph. D and contribute to spreading choral music in Lebanon and the region as well as improving music education in schools and universities.
Young, passionate and motivated, it is in her mission to break stereotypes in Lebanon and assert herself as a woman in positions of leadership.