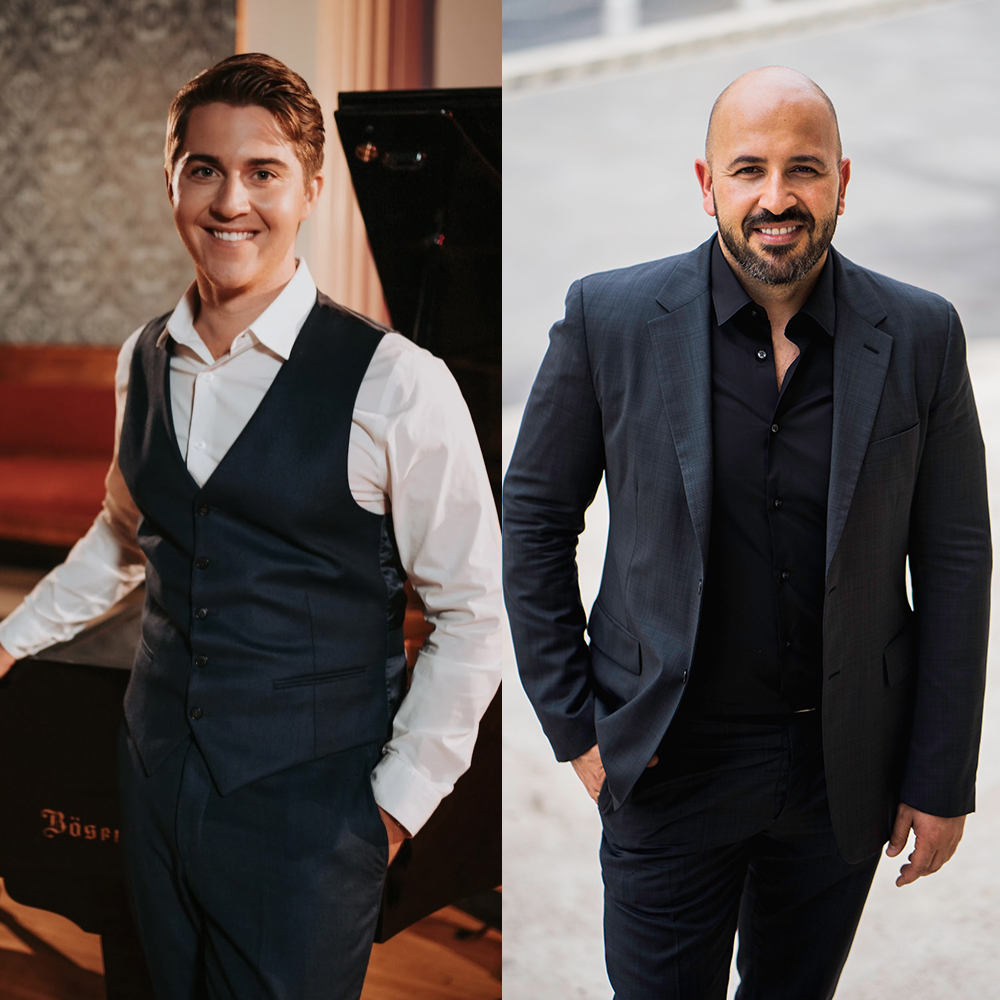 JACK SWANSON, TENOR
Stillwater, Minnesota native Jack Swanson is quickly becoming one of the most sought-after young tenors in the opera world. His distinctive high lyric voice is known for singing the acrobatic arias of Rossini and the legato melodies of Donizetti.
‍
This season, Jack Swanson will debut with a number of European companies: first with the Teatro Regio in Torino as Almaviva in Il Barbiere di Siviglia, then with the Opéra National de Lorraine in Nancy as Tamino in Die Zauberflöte (a role debut) and finally at the Opéra National du Rhin in Strasbourg as Ferrando in Così Fan Tutte (a role he will have just debuted for his return to the Oper Frankfurt).  He will also sing a concert of Mozart, Bel Canto and Romantic Italian songs in Beirut, Lebanon. Future engagements include a stage debut with the Houston Grand Opera and returns to the Santa Fe and the Minnesota Operas.
‍
Last season Jack Swanson returned to the Norwegian Opera for Almaviva in a new production of Il Barbiere di Siviglia before returning to the Garsington Opera for the title-role in Rossini’s Le Comte Ory.  He then finished the season by making his Rossini Opera Festival debut as Florville in Il Signor Bruschino.  In concert he was heard as the tenor soloist in Rossini’s Stabat Mater with the Accademia di Santa Cecilia in Rome and Myung Whun Chung.  He also appeared in solo recitals in Frankfurt and in Pesaro.
‍
Previously, Mr. Swanson debuted with new companies in new roles: first in Frankfurt as Rodrigo in a new production of Rossini’s Otello, then as Belmonte in Die Entführung aus dem Serail with Opera Omaha.  In concert, the tenor was heard in Paris in Rossini’s Messa di Gloria and at New York’s Alice Tully Hall for a concert of pieces by sons of J.S. Bach.
‍
The previous season Jack Swanson made several role and company debuts, first as Nemorino in L’Elisir d’Amore with the Norwegian Opera, later as Sam Kaplan in Street Scene with Oper Köln.  He returned to the title-role in Candide for concert performances in Paris and Marseille and to his celebrated portrayal of Count Almaviva in Il Barbiere di Siviglia with Portland Opera.  In concert, he performed music by Leonard Bernstein at the Moab Music Festival and by John Musto (his Bastianello) with Festival Napa Valley.
‍
Prior to that Mr. Swanson made notable debuts with Glyndebourne Opera as Almaviva in Il barbiere di Siviglia, the Los Angeles Opera in the title role of Candide, the Lyric Opera of Kansas City as Almaviva, and his mainstage debut with the Santa Fe Opera as Lindoro in L’italiana in Algeri. On the concert stage, Mr. Swanson was heard in Bernstein on Broadway concerts with the Orchestre National de Lille and in Rossini’s Stabat Mater with the Choral Arts Society of Washington.
‍
In 2016-2017, Mr. Swanson was heard as Camille in The Merry Widow with Winter Opera St. Louis, Frederic in The Pirates of Penzance with Opera Memphis, Ramiro in La Cenerentola with Opera Delaware, and Albazar in Il Turco in Italia with Garsington Opera. In concert he sang Messiah with the Indianapolis Symphony Orchestra, Bruckner’s Te Deum, with the Houston Symphony Orchestra, and Mozart’s Requiem with the Oregon Symphony Orchestra. Other appearances included Washington Concert Opera’s 2017 gala, the Rising Stars of Opera concert series with the Richard Tucker Music Foundation, and on a recital program at the Caramoor Center for Music and the Arts.
‍
In the 2015-2016 season, Mr. Swanson made his Des Moines Metro Opera debut singing the role of Fenton in Verdi’s Falstaff and performed the role of Ramiro in La Cenerentola with Opera Fort Collins. Mr. Swanson earned a Bachelor of Music in Vocal Performance from the University of Oklahoma, where he performed the roles of Don Ottavio in DonGiovanni and Nemorino in L’Elisird’Amore.  In May of 2016 he received his Masters of Music in Vocal Performance at Rice University.  While at Rice, Mr. Swanson performed the roles of Almaviva in ilBarbierediSiviglia and Eurimaco in Monteverdi’s IlRitornod’Ulisse in Patria.  Additional opera roles include Tonio  in LaFilleduRégiment and Count Belfiore in Mozart’s LaFintaGiardiniera, and two years as an apprentice at the Santa Fe Opera. Mr. Swanson spent two summers as a young artist with The Seagle Music Colony, where he performed the roles of Tobias Ragg in SweeneyTodd and the title role in Britten’s comedic opera AlbertHerring.
‍
Also known for his concert work, Mr. Swanson’s credits include Handel’s Messiah, Dubois’ The Seven Last Words of Christ, Mozart’s Requiem and Carl Orff’s Carmina Burana. Other engagements include Holiday Favorites with the Arizona Opera and Birmingham Opera, and the Houston Grand Opera’s 60th anniversary gala where Mr. Swanson performed alongside HGO’s studio artists and world-renowned mezzo-soprano, Joyce DiDonato.  Swanson made his Kennedy Center debut singing selections from Schumann’s Dichterliebe.  Mr. Swanson is the competition winner and recipient of several prestigious awards including first place in Florida Grand Opera’s Young Patroness Competition, The San Antonio Music Club Competition, The National Opera Association Competition and The Hal Leonard Art Song Competition.  He twice received the Richard Tucker Memorial award from the Santa Fe Opera.  He was a finalist in both Houston Grand Opera’s Eleanor McCollum competition and Fort Worth Opera’s McCammon Competition. Recently, Mr. Swanson was featured on National Public Radio's Young Artist in Residence program, PerformanceToday.

Maatouk published his different articles and books with Geuthner’s edition in Paris (France) and in international musicology journals. He recorded 13 CD with the Antonine University chorus. 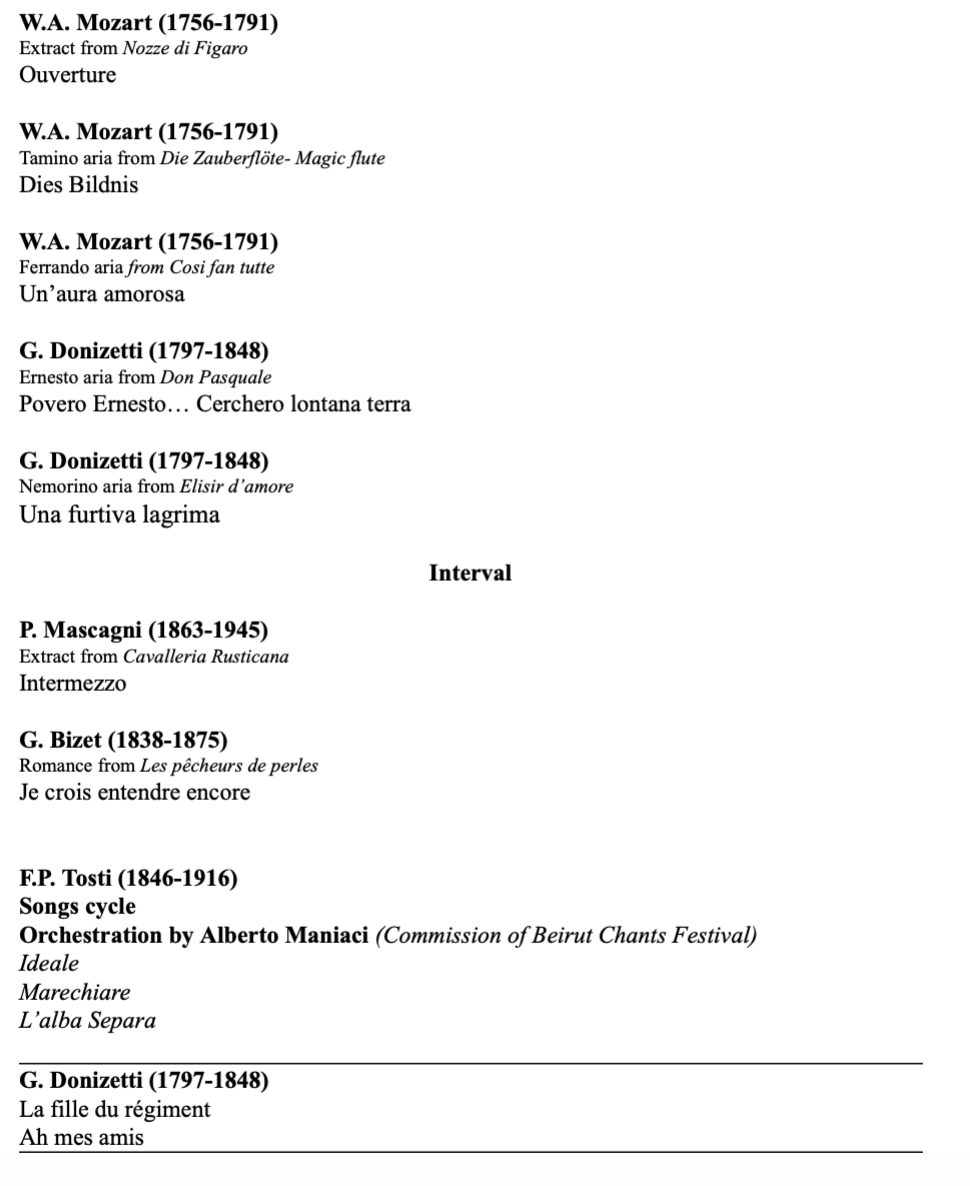