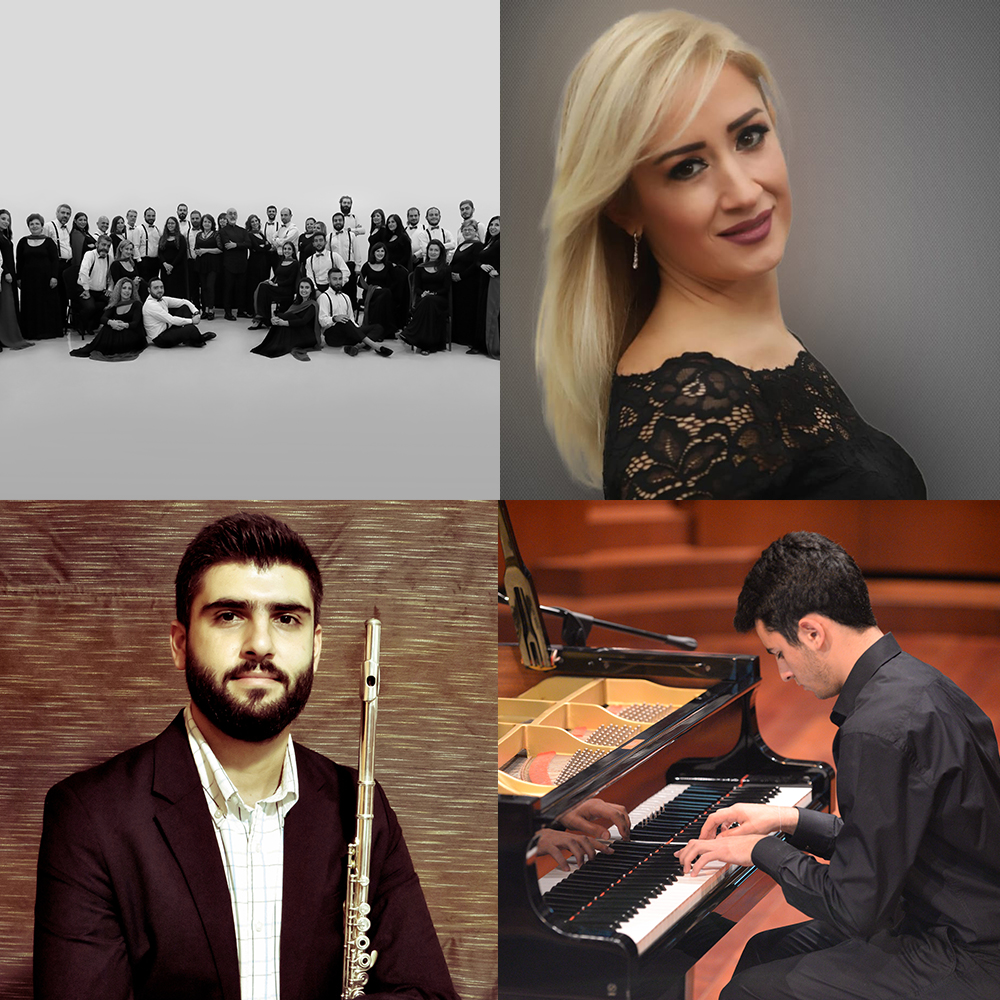 Kousan Choir
The "Kousan" Choir of Hamazkayin Armenian Educational and Cultural Society was founded in 1910 in Constantinople , by Father Komitas. The tentative of this choir is to sing classical patriotic and spiritual musical works. The first choir group has around 300 singers.In 1919, student of Komitas Parsegh Ganatchian revived the Choir in Constantinople till 1921. After that, in 1932 the Choir survived by the efforts of Parsegh Ganatchian in Lebanon and they performed in several Armenian communities in Lebanon several regions, Damascus, Aleppo, Baghdad, Constantinople. During 1990’s, the Choir turned under the take care of   Hamazkayin Armenian Educational and Cultural Society . After Parsegh Ganatchian, Dr. Emmanuel Elmajian, Kevork Kandaharian, Haroutyoun Topigian and Yervant Yerganian conducted the choir. Later on, the choir was conducted by Barkev Taslakian. At present, Krikor Alozian conducts the choir. It has around 50 members. Its repertoire includes Armenian sacred music and choral music of  Armenian renowned composers such as Komitas,Yegmalian, Kara-Murza, Ganatchian, Aznavourian, Mazmanian, Tchoukhadjian, Begoyan and Avetyan.

Shoghig Torossian, Soprano
Lebanese Armenian Soprano singer Shoghig Torossian was born in Beirut, Lebanon.Her vocal talents and love towards music were manifested in the early days of her childhood.
‍
Shoghig Torossian has followed the Lebanese Hamazkayin Parsegh Ganachian Conservatory specializing in the vocalization domain and has completed the specified courses in high distinction and according to the agreement reached, her diploma was certified from Yerevan State Conservatory after Gomidas.
‍
In addition to her solo recitals that took place in 2009, 2010, 2012, 2014, 2015 she has had a number of other appearances in Armenian and other foreign stages during cultural events in cooperation with renowned musicians and performers. She has always been the principal soloist in the “Shnorhali” choir of the Catholicosate of Cilicia and the “Kousan” choir of Hamazkayine .On September 2014, upon the invitation of the Armenian Ministry of Diaspora, shoghig Torossian has a series of performances in different location of Armenia where she was greatly applauded and on this occasion, awarded the “My Armenia'' appreciation note.
‍
In September of 2015 shoghig Torossian was the one and only singer who represented Lebanon and Hamazkayin Cultural Association in the “We Sing Gomidas” Pan Armenian Festival and it was at this time that she was appointed on the executive director of the Lebanese chapter of the “International Association of Singers”.
‍
Under the auspices of the Hamazkayin Regional Committee and in cooperation of the American University of Beirut ,  on March the 28th on the occasion of the 100th Anniversary of the Armenian Genocide, Shoghig Torossian had a solo recital in the presence of large number of people.On April 3,2016 shoghig Torossian had another solo recital in Yerevan, Armenia. That was attended by governmental dignitaries and a huge audience. This event was one of the greatest achievements of Shoghig Torossian about which the press and the media in Yerevan spoke highly of.
‍
In November 2017 she was awarded a certificate from International Academy of Culture and performing Arts acknowledging her head of the academy in Lebanon.
‍
Continuing her subsequent concerts, she had a concert in Canada in 2017 and her recent and most prominent concert took place in February 2018 in Yerevan with STATE ARMENIAN SYMPHONIC ORCHESTRA  conducted by Sergey Smpadian.
Another great achievement was her concert in Nagorni Garapagh-shoushi under the auspices of the Minister of Culture in Artsakh on August 13, 2019.
‍
On 7th of July 2020 Shoghig Torossian won the “National prize”of Lebanon during 28th Music World Competition held in  Vienna representing Lebanon and  On 31th of July 2021 she won the second prize of MEDICI International music competition.
‍
Shoghig Torossian has recorded two CD-s “A Compilation of Liturgical Music” and “Tunes, Odes and Treasures”. The latter was recorded under the high auspices of His Holiness Aram  Catholicos of Cilicia. She also recorded new songs composed by famous Armenian composers.
‍
Shoghig Torossian is a music instructor in solfeggio and vocalization at the Hamazkayin Parsegh Ganachian Conservatory and choir conductor at Armenian Evangelical Central High School.

Kevork Keshishian, Flute
Born in Beirut, Lebanon in 1992, Kevork Kechichian started his musical studies in flute performance in the Lebanese National Higher Conservatory at the age of 11. After studying 9 years in Lebanon with Professor Alin TATARU (former principal flutist of the Lebanese Philharmonic orchestra) he went to Armenia to continue his professional studies in Komitas State Conservatory of Yerevan, from where he got his Bachelor of Arts in Musical art with honors in 2016. During his stay in Armenia, Kevork also studied Duduk and many Armenian folk wind instruments such as Shvi and Zurna (Armenian traditional flutes) in parallel of flute.
‍
After graduating from Komitas Conservatory, he returned back to Lebanon and continued his master degree studies in musicology, at Antonine University in Baabda with Professor Nidaa Abou Mrad, researching about the Armenian traditional music of the Lebanese Armenians.
‍
In 2019, K. Kechichian had the opportunity to continue his musical studies in the Royal Birmingham Conservatoire in UK, where he studied flute with Professor Jonathan RIMMER, piccolo with Professor Andrew LANE and assisted in many masterclasses with different professional international flutists such as Alena WALENTIN, Kevin GOWLAND and played many concerts with the Students Orchestra of the RBC. Kevork also had many masterclasses with the international Lebanese flutist, Professor Wissam BOUSTANY.

Currently, Kevork is a member in the Lebanese Philharmonic Orchestra where he began his professional musical carrier since 2017, and he is a flute instructor in Antonine Music School and Ecole des arts Ghassan Yammine and Hamazkay in Parsegh Ganatchian College of music.

Aren Donerian, Piano
Aren Donerian is a Lebanese-Armenian multi-instrumentalist born in Beirut, Lebanon in 1998. He started playing the piano at the age of 6 and got accepted at the Lebanese National Higher Conservatory of Music (LNHCM) two years later. He also started playing the violin when he was 11 and again got accepted at the LNHCM. Along with piano and violin, the young musician started learning the acoustic guitar at the age of 14, the electric guitar at the age of 15, the bass guitar at the age of 17, and drums/percussions at the age of 18.
‍
He was also a bass singer in the Lebanese National Youth Choir in 2018, and the piano accompanist of the Armenian “Pelpoul Children’s Choir” and the “Ardzivian Choir”.
‍
Aren is now the lead guitarist of the Armenian classic rock band “Since The 15”, the pianist/keyboardist of the Armenian folk band “Mihran”, and the pianist of a Trio formed with his two younger brothers, Alec (violin) and Arno-Moses (cello).
‍
In parallel with music, Aren Donerian studied International Business Management at Notre Dame University (NDU), where he has been the president of “The Music Club of NDU” since 2017. He is currently a piano Baccalaureate student at the LNHCM, and doing his master’s degree in Business Strategy at NDU. 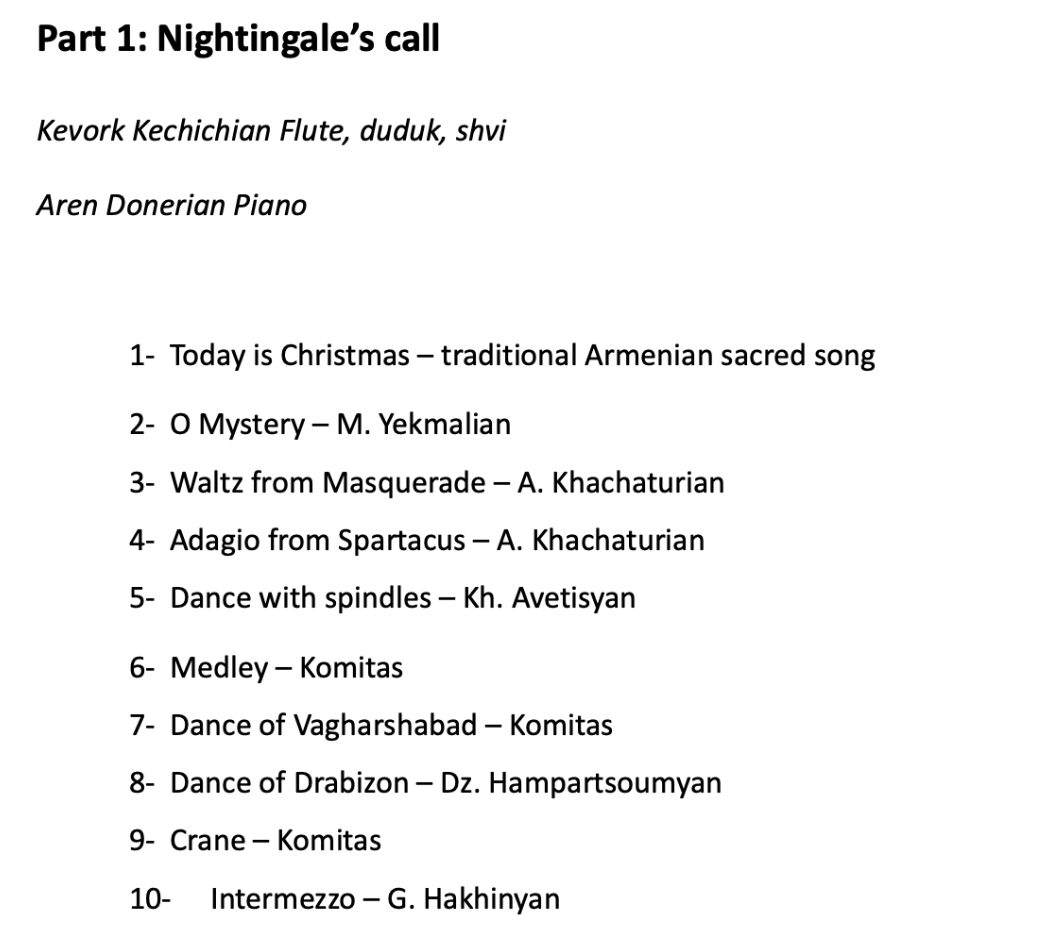 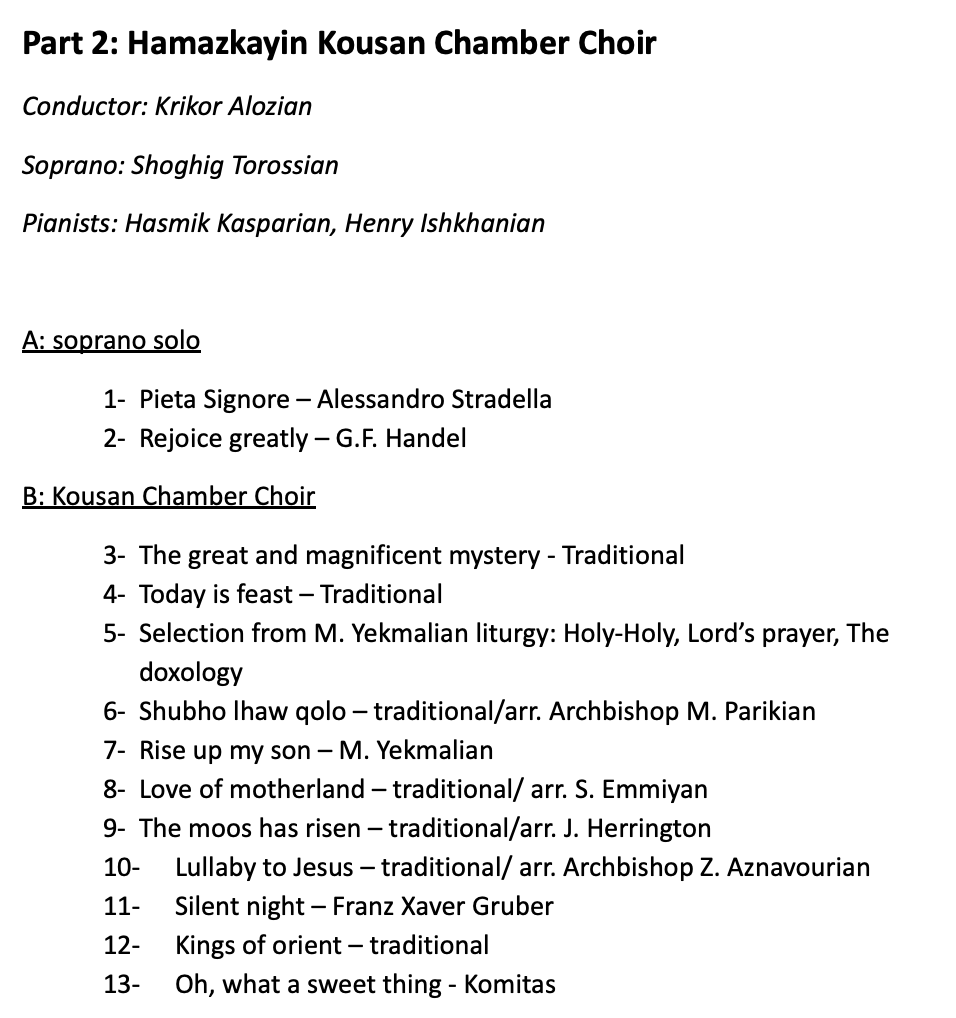